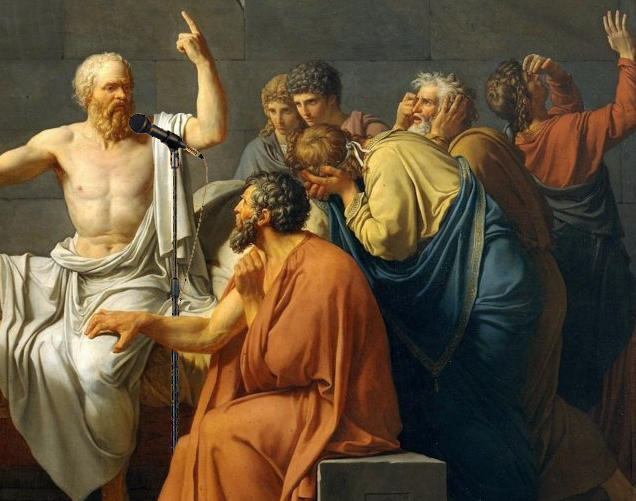 I am a stand-up philosopher. That means I talk about philosophy for the sake of entertainment rather than enlightenment. But if you get slightly enlightened as a result, I would consider that as a happy side effect.

When I decided that I wanted to be a philosopher, I knew that I was going to have a hard time. I could actually see people’s eyes glaze over when they hear the term ‘philosophy’. I had to add the phrase ‘stand-up’ just to keep people interested. I’m assuming you know what stand-up means. And I assume you don’t care what philosophy means. Because, who in their right mind would?

Well, you are wrong. You all need to understand philosophy. It will make you a better person, it will make the world a better place. How? To know that, you must know exactly what philosophy is.

Objective reality has well defined things. Measurable things. Predictable things. Except, of course, at the quantum level – so far the best scientific explanation of what’s happening there is: some weird, strange things!

Subjective reality, on the other hand, does not lend itself easily to any of this. And thanks to that, philosophy doesn’t lend itself to easy answers. Or definitive answers. Or in many cases, any answers at all.

Thankfully, philosophy is more about the questions than it is about the answers. Philosophy is the practice of questioning subjective reality.

Subjective reality is a collection of judgments about how the world is or should be. Judgments like, “I am a bad person”. “Democracy is a good system of governance”. “Stand-up philosophy is the noblest form of art.”

Subjective reality can be relative to just one person(for eg. yourself), or relative to a people group(for eg. a football fan club). In a group, its a shared set of beliefs among all members(or majority) of the group.

Essentially all these are beliefs. They can shift, they can change.

Philosophy is the practice of questioning these beliefs, prodding at it till we understand it a bit better. And even changing it, if need be.

Philosophy has been the pursuit of finding the “true” beliefs. That’s a problem. “True” is hard to define. So “True Belief” is perhaps not an ideal goal. Maybe a better goal would be “Useful Beliefs”.

Philosophy promises us tools to analyze these beliefs, to understand them, and if need be, change them. Once you recognize which belief is more useful for you and the community as a whole, you can try and change your belief.

Subjective reality, or our perception of the world IS the world for us. Its mold-able as its a reality based on perceptions. And because of that, once you learn how to change your belief about the world, you are learning how to change the world itself.

Tl;dr aka The Summary

Philosophy is questioning those beliefs and changing it, if need be.
Perception of the world IS the world for us. That reality is mold-able as its a reality based on perceptions. When you change your belief about the world, you are changing the world itself.

6 thoughts on “What is Philosophy and Why should you care”